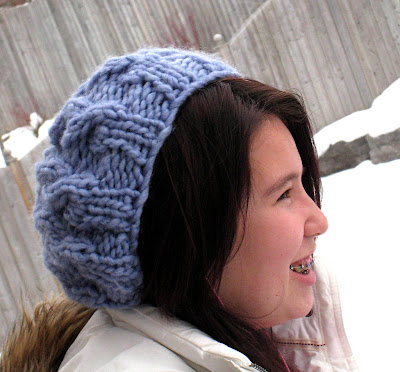 May 28, 2009 update: It seems this pattern has been very popular on Ravelry, with 111 projects so far! However, a good number of people have said that the pattern fits more like a beanie than a beret. The one I made for Julia seemed beret-like on her, but variations in gauge, head size and yarn might account for the differences. Fortunately, most of the knitters were still happy with the results, but this is a warning that your beret might turn out not so beret-like. I suggest you browse the project photos on Ravelry to get an idea of how the hat looks made up in different yarns. (Note that you need an account on Ravelry to see them.)

Julia asked for a beret to match her legwarmers, so I decided to experiment with some Sirdar Big Softie yarn I had available. This stuff is super chunky yarn and it took me just over an hour to make the beret. I've included the pattern below. If you make it, keep in mind the headband is fairly loose, so the beret looks appropriately slouchy. 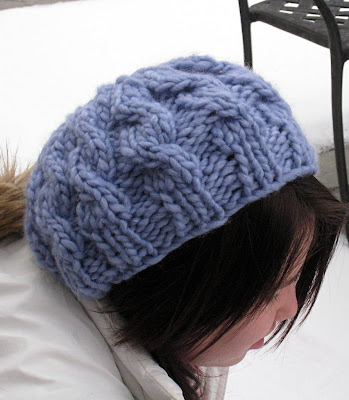 Repeat rows 1 to 6 of cable pattern.

Note: Minor correction was made to pattern on Dec. 2, 2008. Second row of crown shaping originally had a *P4, K1* repeat. This was changed to *P3, K1*. Thanks to the knitter who spotted this error.

I love it! My daughter has been asking for a "cool hat that doesn't look like mom made it". I think this fits the bill!!!

omg that looks so awesome!
i think im gonna make a few as xmas presents :D

The hat looks wonderful and easy to do. One question though: did it stay on her head as she skied down the hill? :o)

MrsPi: A toque or helmet would definitely be better for skiing! Can't get my teenager to wear a toque, though, even when it's freezing cold outside, so something that barely covers her head will have to do! :-)

Hello. I just made this hat. But, I had a change for line 2 of the crown shaping. Shouldn't it be K1, *P3 K2*?? There was a 5 stitch repeat on the prior row (P2+K2+K2T = 5). Or, at least, that's how mine turned out. And, my stitch count came out the same as yours. Anyway, started last night, finished today and LOVE THE HAT! Thanks for posting the pattern. :-D
Jonnie

You're absolutely right, Jonnie. I've made the correction. Thanks for spotting the error!

Jelly, if you're using yarn that's meant to be used with size 11 (8mm) needles, then your gauge will probably be different. I suggest you do a test swatch to see how much smaller your piece is.

You can then do one of two things. You can add cable repeats both lengthwise and widthwise to get the required dimensions. Your hat won't be as thick as the original. You can also try holding two strands of your yarn together to see if you get something similar to what the Sirdar Big Softie yarn gives.

I also recommend you get an account on Ravelry if you've not done so already. There are over 70 people who have done this project and they've posted photos, information about their yarn choices and comments. There have been some who have adapted this pattern for a thinner yarn and it may be helpful for you to read their comments about how they had done it.

Would this pattern work with DPN so that there wouldn't be a seam to sew at the end?

Yes, certainly you can make this beret with DPNs. Just omit the last stitch at the end of the right-side rows. This stitch was added solely for seaming. I wrote the pattern for straight needles, just because I figured most people wouldn't have DPNs in such large sizes.

lovely! So quick--thank you very much for sharing!

Do you mind giving me the measurements? Like: 1. How many inches it is around the ribbing (just so I can see if it fits my head haha) and 2. How tall the hat is
Thanks

Hi Alex,
I'm afraid I can't offer the exact measurements right now, as I'm out of town. Also, I'm not sure I'll be able to find the exact sample I used anyhow! In any case, I would actually recommend doing a gauge swatch with the cable pattern, so you can see how wide and tall a cable repeat is. Then, you can customize it to fit your head. The ribbing is very stretchy, so just make sure you don't cast on too tightly and it should fit most heads. I suggest you check out the many comments on Ravelry on the projects page for tips on making sure the size is correct, especially if you're using a different yarn.

Great pattern! I've been looking all over the place for one. I do have one question though--if I wanted to make it more slouchy in the back, do know how I could do that?

wow i love your pattern. I have 2 skeins of 50g/53yrds wool. the gauge is 16 rows of 11 stiches for a 4inch square on 7mm needles. Can I still knit your pattern? What ajustements should I make and do you think I have enough wool??? thnx!!!

Wow, I love this pattern! I would like to knit it with 2 skeins of 50g/53yrds wool. will that be enough? the gauge is 16 rows, 11 stitches make a 4inch square on 7mm needles. what changes should I make to the pattern? thnx!!!

Hi Knitting Addict. You could try using 8mm needles to see if you get get the correct gauge. If you do, then you should have enough yarn. I recommend you look up this pattern on Ravelry. A number of people have done it in different yarns and have added notes. Some have adjusted the pattern (by adding stitches) to make it work for different gauges. You might even find that someone else has done it in the same yarn you have.

Hi and many thanks for this great pattern! Would accept that I publish a french translation on my blog with a link to yours? I've just begun it and I'm in hurry to post it!

This is lovely - thanks so much for sharing!

This is a great pattern, thanks so much for posting it! I did have a question though, when you give the gauge for the pattern, are you using this with the 11 or 15 needles?
thanks!

Thanks for your comments, purlknitrepeat. I did the gauge with the larger needles that are used for the majority of the knitting.

thankyou for posting this pattern, it looks great!
I occasionally have the opportunity to sell some of my knitted creations to friends. I am keen to obey copyright laws however, so was wondering if it would be appropriate for me to sell any versions of this pattern which I knit, providing that I credit the pattern to you?

Carolyn, I ask that, in general, knitters not sell items made from my patterns. However, I have, in the past, had requests from people who want to sell items for charitable purposes or use the patterns for teaching purposes, and those uses have been OK with me. Thanks very much for asking first. I do appreciate that.

Given that you've been successful at selling your knitted items to friends, perhaps you might want to try designing patterns yourself, even ones customized for the people you sell to. It's not that hard to come up with a pattern for a basic hat, mitten or scarf. That way, you won't have to worry about copyrights.

Best hat pattern ever-made two already, and they only take 3 hours to make per hat-even for an inexperienced knitter like me. They fit like a beret for me, too (used Malabrigo Rasta)- finally something great looking I can knit as a present that doesn't cost me lots of grey hair...

this is a lovely pattern and seems very easy. I'm going to make one soon! I make lots of berets for friends and family. However, I have found that blocking berets really help enhance their shape. I quickly spritz them, and put a dinner plate inside them to shape them. Then, let dry for 24 hours. So easy!

Hi, can you be more specific about which technique you use to increase (make a stitch)? There seem to be quite a few ways to do it and want to make sure I use the right one :-)

I use the increase that's commonly known as "make one", where you lift the yarn between the stitches on the previous row, place on your left hand needle, and knit into it, making sure you knit into the front or back (depending on how you slipped the yarn onto the needle) to avoid a big hole. If you search on the Web for "make one knitting", you'll find some videos to show how it's done. Some patterns distinguish between "make one left" and "make one right", but it doesn't matter much for this pattern.

Hi I was just wondering how much wool you ended up using. I have two skeins of 43yrds and I just need to know if I have enough or need to buy some more.
This is a great pattern though! I looked everywhere for one and this is perfect! :)

I can't remember the exact yardage but I'm pretty sure I had a good amount left over from my 2 skeins of Sirdar Big Softie, which is 49 yards per skein. I think that two skeins of 43 yards will be enough. If you have a Ravelry account, you can browse through the projects for this pattern. Some of the knitters have left more detailed notes about their project, including yardage used.

To those "Moms" who knit hats for their daughters who downhill ski...not too smart....as they should be wearing ski helmets,
but certainly would be fine
"after-ski"....

It's true that this hat is not meant for downhill skiing. In our family, we always use helmets. You could wear this hat for cross-country skiing, but a tight toque would stay on better. :)

I want to knit this in the round

Laurisa, that would work. If you go to the Ravelry page for this pattern, you'll see that a number of people have done this pattern in the round.

Hi Emily,
Sorry for the delay in posting. The instructions actually have you repeating *p1, ssk*, not just the ssk part. Hope that helps.

Paulina thanks for sharing. My nieces are getting the cowl and beret for Christmas. Quick knit that looks great.

Thank you for the pattern! I made it for myself and immediately got a request to make one for a friend at work, then going home for Christmas my Mum demanded one! Very quick and easy so I am more than happy to spend an evening or two on them after work.:)

What a great pattern, I finished it in a short evening and wore it straight away to walk the dog. I cast on using 7mm needles and started the rib with 7's then went onto 10mm for the majority of the hat. It's not slouchy as such but fits a treat and looks super on. I'm going to have such fun knitting various versions and experimenting. Thank you for sharing ��