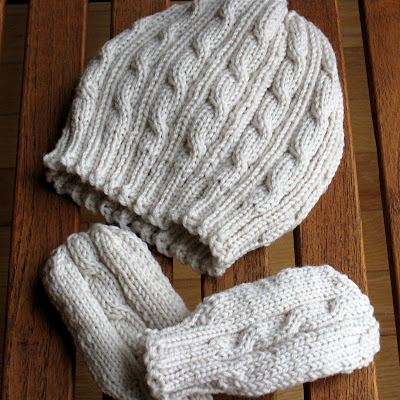 Here is the pattern for a hat and mittens set I made for a friend's new baby. The mittens are thumbless. I ended up using approximately 150m of yarn.

Abbreviations:
K: knit
P: purl
C4: Make cable over 4 stitches by holding first two stitches on cable needle at front. Knit two stitches from back and then knit the 2 stitches on the cable needle.
M1: Make one additional stitch by working into the previous row before next stitch.
Pat4: Follow the cable pattern for 4 stitches (either K4 or C4 depending on row).
K2tog: Knit 2 together.
SSK: Slip, slip, knit to decrease a stitch.

Draw yarn through all 12 remaining stitches and close tight. Secure yarn in a knot. Weave in ends.

Divide stitches so there are 10 stitches on each of two needles. Graft stitches together to close the top of the mitten. Weave in ends.
Posted by Paulina at 6:53 p.m.

thanks! i have a baby shower coming up and i thinki will try these!
Lisa

This is a beautiful pattern! Thanks for being so generous and sharing. I just finished making some baby booties with Lorna's Laces dk swirl yarn and was looking for a cabled baby hat to match. I came across this pattern and it looks perfect! I'll let you know how it looks once I'm finished. Thanks again!

this is really great pattern :D i made one for my friend and she likes it so much. Thank you for sharing this :D
I'm new in Knitting World

I love this hat and mitten set! However, I wish you had a baby bootie pattern to match. It woudl make a lovely set for a baby shower gift.

Good idea, Barbara! I will keep this in mind, though I don't think I can promise anything right away. Life is busy right now. :)

Such a cute pattern. Planning to try in in a light worsted instead of a DK in order you use some stash yarn...

Love this pattern! My son is wearing his from last year and I get compliments on it all the time. It's getting a little small though, so I'm making a new one tonight. Thanks.

Just made this pattern after finding the link on Ravelry. Thank you for the clear instructions! Can't wait to gift this in a few months to a friend who is expecting!

I cant wait to make this pattern for my 1st grandchild arriving in September. Thanks for sharing!!

Just made this for a baby shower. So cute!! Thanks for sharing!!