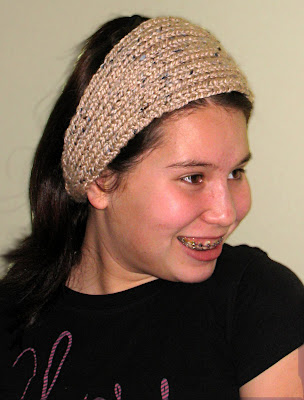 This earwarmer was inspired by one I saw on the Urban Outfitters Web site. I made a few adjustments to make it less fussy for my kid who generally refuses to wear a hat unless there's a windchill warning. At first, Julia thought the one we saw on-line looked silly but then warmed up to the idea of wearing one. After trying on my first attempt, she declared it was OK but she wasn't crazy about the colour. So I asked her what colour she would like. Her reply: "Maybe a white one ... or pink. Red is nice too. Actually, Mom, can you make me a whole bunch in lots of different colours?" Sure, sweetie, I'll get right on it.

Anyhow, here is the pattern to make your own. I used a chunky yarn for the one in the photo, but I used two strands of Aran-weight yarn for another. It ended up a bit wider, and I worked fewer rows. The pattern is easily adjusted to various yarn weights. I called this a "one-hour" pattern. To be totally truthful, it took me a bit over an hour, but I was watching a good episode of Battlestar Galactica while knitting it. 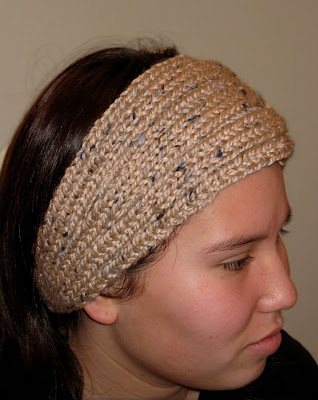 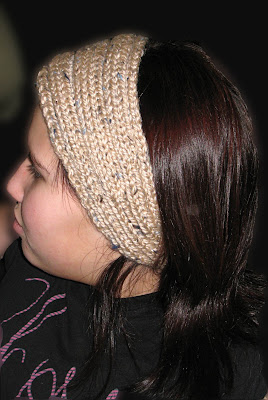 Knit central portion:
Patt until length from cast-on edge is 10 inches or half the desired circumference.
(Final circumference should be about 2 inches less than head measurement from nape to forehead and back to nape.) You are now at the half-way point and will reverse shaping for the remainder of the earwarmer.
Count the number of rows completed from marker, including the row that the marker is on, and continue in the pattern for this many rows.

Knit 4 more rows, knitting all knit stitches and purling all purl stitches.
Cast off and sew ends together.
Posted by Paulina at 9:53 p.m.

Thank you for this pattern! It is very quick and my granddaughter will love it. I made mine a little wider. Hope to put up a pic in my blog soon. I am casting on for the Speedy Cabled Cowl next!

Thank you for providing the pattern. I needed a quick project for some left-over yarn and this was perfect.

Thanks so much for the pattern! I had an awkward ball of yarn that I wasn't sure what to do with, and this suited it perfectly. It'll make a lovely gift ;D

Thanks for the pattern!!! I have made two earwarmers so far for the Mittens & More program here in Portland OR. They will be going to foster kids in our area. I loved the pattern so much I am thinking of making one for myself.

Thanks! Heading to a colder climate than where I live, so I knit this up quick just in case I need it!

Love your pattern, thank you. So easy to follow and turned out great.
Ready to make some more ☃️😊

Hi this looks exactly like what my daughter wants, except she wants ties so she can tie it on at the back. I'm clueless how to modify the pattern. Would love ideas, thanks so much!!

Hi Mollie. I think it would be easiest to do this by making the headband slightly shorter by reducing the length of the central portion by an inch or two and then adding ties at the ends instead of sewing up. To make the ends a bit more tapered, you could start with 3 stitches, then increase to 5 and continue, and then at the very end, decrease the 5 stitches to 3 before casting off. To make the ties, try Googling "I-cord ties". Good luck!